On December 21st, they released their song #SorryNotSorry on the iTunes Apple Store.

Their digital release, DIAMONDS, was released on May 2nd.

They participated in TOKYO RAINBOW PRIDE 2017 on May 6th, showing their support to the LGBT+ community.

in Mid-August, the music video for #SorryNotSorry was released under the channel lute / ルーテ, however, it has since been taken down.

On February 21st, they released the music video for their song GIRLS GONE WILD. It was known to have accumulated 300,000 views in under 24 hours.

On September 16th, BananaLemon performed at DCM Festival 2018 at Seoul, South Korea without R!NO. It was stated that she was on hiatus due to health issues.

On September 19th, it was announced that R!NO had officially left the group.

BananaLemon's first releases as a trio, Clap, Smile, Dance! and Beautiful were released on October 5th.

On April 25th, they released a new music video for their new song #slaysian. Lety was revealed as their new member. 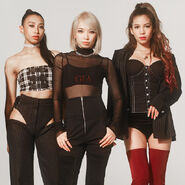 Add a photo to this gallery

Retrieved from "https://jpop.fandom.com/wiki/BananaLemon?oldid=151645"
Community content is available under CC-BY-SA unless otherwise noted.