Were you looking for the mini-album Ho-kago Tea Time?

Ho-kago Tea Time (放課後ティータイム, After School Tea Time), also known as Sakurako K-ON Bu (Sakura High Light Music Club), is a voice actor, girl band based on a fictional band in the anime K-On!. In the anime, the band is formed from the members of the Sakuragaoka Girls High School Light Music Club. The band first performed in the anime with only four members (anime characters by the first name): Ritsu, Mio, Tsumugi, and Yui. Azusa joined the club and band soon after. The voice actors for the characters sang them songs, character songs, and insert songs and later learned to play their respective instruments and performed live. Attendance at their live performances was only for the lucky and persistent as they only performed twice as planned events (2009, 2011) and the last performance was an un-announced surprise performance at the Animelo Summer Live event in 2019.

Note: This is a generic section stub. Expand it by clicking

Edit to right of the section title. 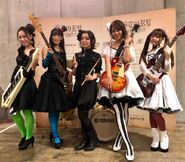 Retrieved from "https://jpop.fandom.com/wiki/Ho-Kago_Tea_Time?oldid=236411"
Community content is available under CC-BY-SA unless otherwise noted.